Mainstream auteurs Joel & Ethan Coen recurrently spin their own unconventional brand of crime story: skillfully calculated meditations — both farcical and bleak — on the flawed logic of unlawful scams, and the sublime human catastrophe that results. The characters responsible for these egoistic and deceptive acts are victims of their own fallibility, and usually have to endure the messy repercussions.

The Coens’ minor characters can and will fail, too. Perhaps my favorite example involves the memorable if puzzling inclusion of Mike Yanagita (Steve Park), a fidgety Japanese-American Minnesotan, in 1996’s Academy Award-winning Fargo. His brief involvement seems superfluous and strange at first; some may wonder if he exists merely for comic relief. But it’s his set up and payoff that indirectly though finally leads our protagonist Marge Gunderson (Frances McDormand) to her answers and the film’s conclusion.

During a terribly uncomfortable reunion between old schoolmates Gunderson and Yanagita, we learn (amidst awkward passes made by Mike) that he’s a recent widower. He has lost his wife, a third schoolmate named Linda Cooksey, to leukemia. This sets a morose tone, with Mike then pondering his romantic intentions behind the get-together with a married and pregnant Marge. Realizing the whole thing was hopelessly misguided, he breaks down, pathetically confessing “I’m so lonely!”

Occurring rather late in the film with no obvious connection to the main plot, the scene is cruelly hysterical but seems as tangential and random to the viewer as it does to our protagonist. However, the following day Marge learns the truth by phone, from a fourth schoolmate: Mike’s marriage to Linda and her subsequent illness, suffering and death are all complete fabrications; in truth Mike has psychiatric problems, and lives with his parents. 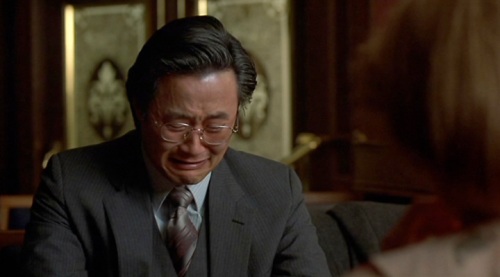 Upon this entirely unexpected discovery, Marge simply replies, “Oh, geez. Geez, well geez. That’s a surprise.” An appropriately understated response, but she resultantly becomes aware that perhaps her Midwestern, inherently good-natured and trusting tradition has betrayed her, rendered her a bit gullible. Ironically it was she who, in an earlier scene, politely called to question her deputy’s sloppy police work regarding auto dealer plates. She then traces the plates to the Gustafson’s Motors dealership in Minneapolis, where executive sales manager Jerry Lundegaard (William H. Macy) initially eludes any potential suspicions from the investigating Marge, despite his strange behavior.

On a new hunch, after Mike Yanagita’s ruses prompt her to reevaluate the details of her investigation, Marge returns to the Minneapolis dealership. Her mere reappearance and brief follow-up with a guilty Jerry Lundegaard is enough to drive him to erratic, desperate measures. After previously avoiding any implication, this time Jerry gives himself away by fleeing during Marge’s questioning.

This chain of events, which effectively leads us to the film’s conclusion, is informed by the shred of doubt triggered in Marge, by her brief night out with Mike Yanagita.